'Sup, MystBlogs readers? Does anyone out there have the soundtrack for Myst IV: Revelations and if so would you be willing to email me the mp3s? If you do, I'll write another blog entry letting everyone else here know how awesome you are!  ^_^  Yes indeed.

I should have been more secretive... Gizmodo.com has linked to my post about the banana injector! Someone's gonna steal my idea and patent it!

On the other hand, a few days ago I saw a group of bananas that were almost perfectly straight, thus adding to the logistical problems of the injecting device. Maybe there is still time. 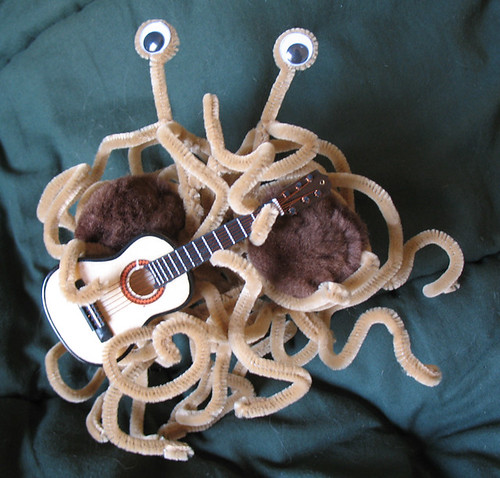 I still maintain that I had the idea first!  : ( 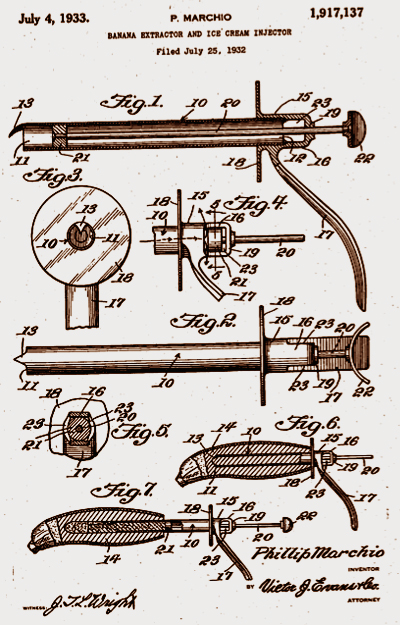 "The invention relates to an implement for coring bananas and filling the latter through the cored portion with ice cream and more particularly to a banana extractor and ice cream injector.

The primary object of the invention is the provision of an implement of this character, wherein the barrel or cylinder thereof is formed with a knife tip so that the said barrel or cylinder can be readily inserted within a banana to bore or core the same and thereafter a charge of ice cream introduced within the banana so that the same may be consumed, that is, the ice cream, on the eating of the banana, thus effecting a combination of banana and ice cream in a convenient and attractive form."

This makes me happy:

This makes me unhappy:

Bootleg CD.  : (  I got my money back, which is pretty lucky. Buyer beware. It seemed too good to be true--I learned my lesson and will definitely be more careful next time. Let me say now though--someday I will own a copy of the Safety EP! 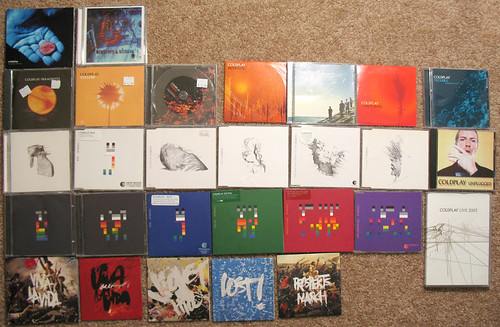 Kumah has made his predictions for 2009, so I guess it's my turn!

February - lawsuits abound as ignorant antenna-TV owners suddenly find their sets to be showing nothing but static.

April - a record-breaking blizzard surprises the northern midwest US, dumping feet of snow and causing power outages in many areas.

June - a well-known religious leader is revealed to have been involved in a sex-related scandal.

October - a relatively well-known, yet extremely old, celebrity dies, causing people around the country to say “That guy was still alive?”

November - Coldplay releases their 5th album, and it is hailed as the ‘best ever!’ by fans. All the Coldplay-haters hang their heads in shame and finally admit just how wrong they’ve been.

First of all, NaNoWrimo is over, and I just scraped through! Still a long way to go. I finished my story arch last night but there is plenty of fleshing out to do before it will be readable. My new, and very reasonable goal, is to have about 60 to 70,000 or so by Dec 20th before I go home for the holidays.

Still, though... I feel pretty damn good. I never could have done this much in a month without NaNoWriMo. Also, thanks to my friends who supported and/or put up with me through all of this. ^_^

November was of course also the month of the Coldplay concert! 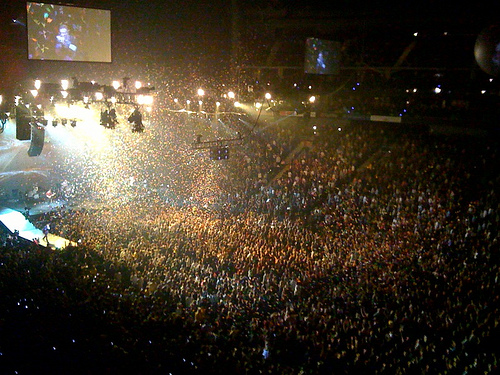 These aren't my shots, but are from the KC concert. This is Lovers in Japan, where the paper butterflies rained down on us. I will never forget the pure elation I felt when they started the first notes of Glass of Water, and I realized I was lucky enough to be at the concert where they played my new favorite song for the first time in the States. And the second encore, where the guys came out into the audience and played two acoustic songs not 20 feet away... amazing... 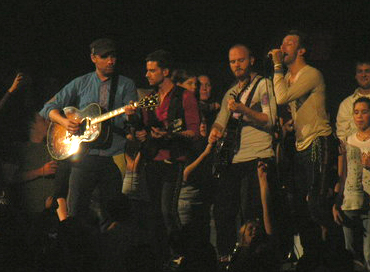 **swoon** Oh, and Will (the bald drummer) sang Death Will Never Conquer with Chris on the harmonica. So cool.

The other awesome thing about November was my trip to Toronto. It was a chance for me to visit not as a Torontonian, but as someone who simply used to live there. I really needed this trip. Canada is completely out of my system now, so to speak. I've seen where my friends work now, and I think I would handcuff myself to my chair at work to get to stay here in Chambana. That's not to say I don't hope to visit TO every couple of years or so; I'm just not longer desiring to move back there. I have too good of a gig here. And I've gotten too used to the quiet. I'd forgotten how damn noisy the city is.

On Thanksgiving Day, quite appropriately, I went up to the Skypod of the CN Tower, and looking out over the entire city, I thanked it. Not outloud of course; that would be silly. This is looking northeast over downtown: 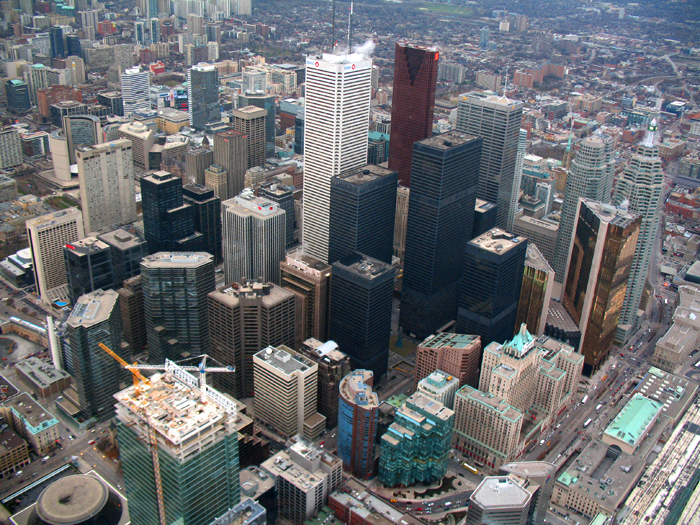 The skypod is really, REALLY high by the way. Totally worth the extra 5 bucks to go up there. So anyway, I thanked the city for everything... for making me less of a coward and opening my eyes to the world outside of North Dakota. I just spent a lot of time up there thinking about how much I had changed since the last time I'd been up there, in the summer of 2005 before even being accepted into the BMC program. And of course I turned due north and specifically thanked the university for all I had learned there.

So yeah, I thanked the city, then turned to the west and got this in response: 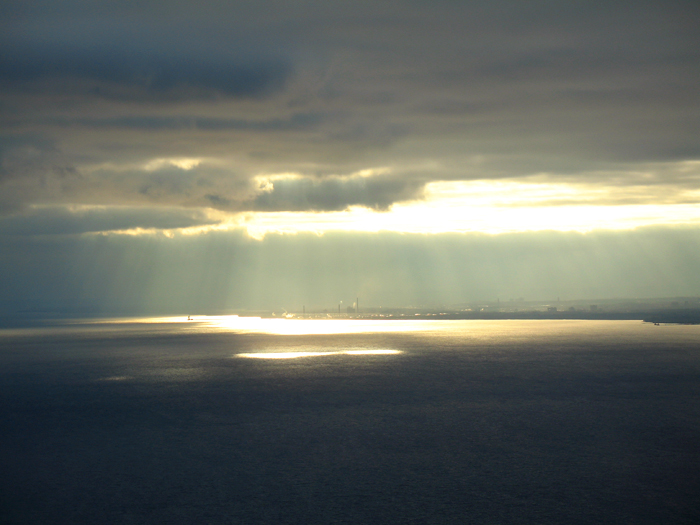 I of course also took the obligatory shot of my feet standing on the glass floor on the observation level. Then on my way out I walked up to the base of the tower and put my hand on it and looked up at it, which gave me a bit of vertigo but was pretty awesome. To stand right next to it like that and think about how tall it really is. (It's really tall...)

Well, as of Saturday, I am an American tourist in Canada for the entire week! I'm not sure how my internet connection will be while I'm there, so this blog may sit neglected until December, but I do plan to visit the Royal Ontario Museum at least once, to see what kinds of new displays they have that visualize evolution (surprise, surprise).

I'm also looking forward to finally seeing what's inside of that weird crystal they built over the course of the two years I actually lived there:

I guess I have a love-hate relationship with it from the outside. I reserve judgment until I see the interior. The dinosaur exhibition should be awesome, though.

In addition to touristy stuff like museums and the CN tower and all that, I also plan to use this time away from my regular life and responsibilities to type my NaNoWriMo book. As of today, I'm exactly on schedule. I mean, to-the-word (33,333 as of Friday). I want to clear 50,000 by Thursday night so I can board my plane the next morning feeling good about having a relaxing weekend. My stats graph may not reflect that depending on internet availability though: